ClockSound found itself in Holland and specifically in beautiful Utrecht to watch one of the top winter festivals in Europe, Le Guess Who?. LGW counts already 10 years of life and it was more impressive than ever. So many things happened within 4 days that one would need to write a whole book in order to describe everything, which would render our article very tiring. Instead, we present you our impressions from the organization and the most memorable live acts that we saw. 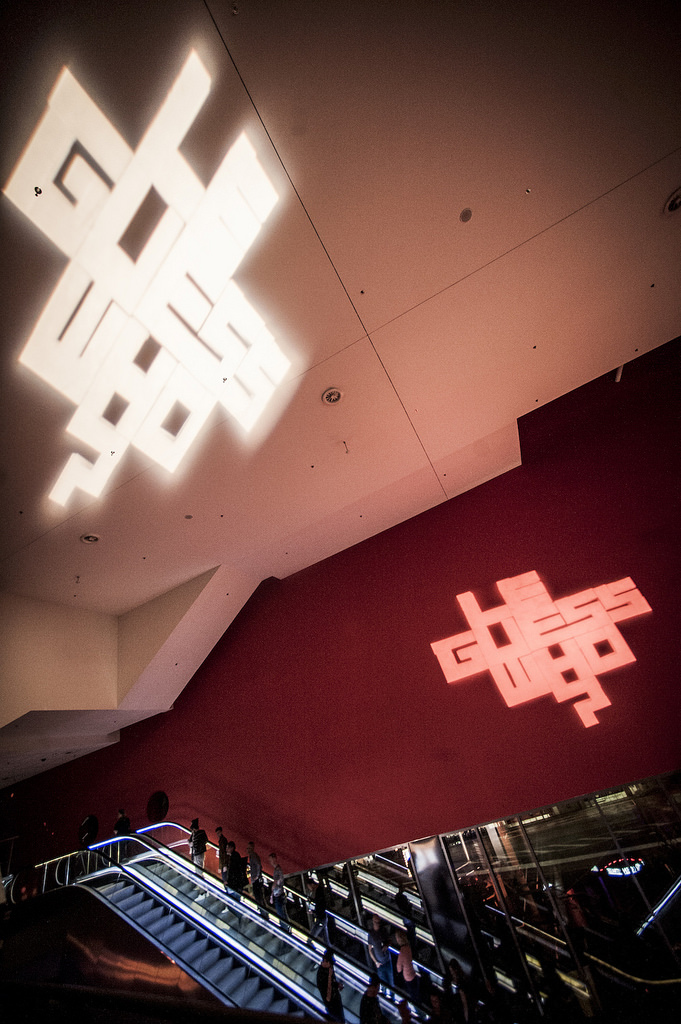 LGW constitutes a unique, at least for the European standards, event that, to our opinion, every music lover should experience at least once in life. A whole city is transformed for 4 days (10-13 November for this year) to the absolute music feast!

What does it entail?

(1)    Concerts until the early hours of the morning in 13 (!) venues in the center of the city, with the basic one being the impressive Tivoli Vredenburg, which offers on its own 4 different venues of impeccable acoustics. Total artists? Around 150. 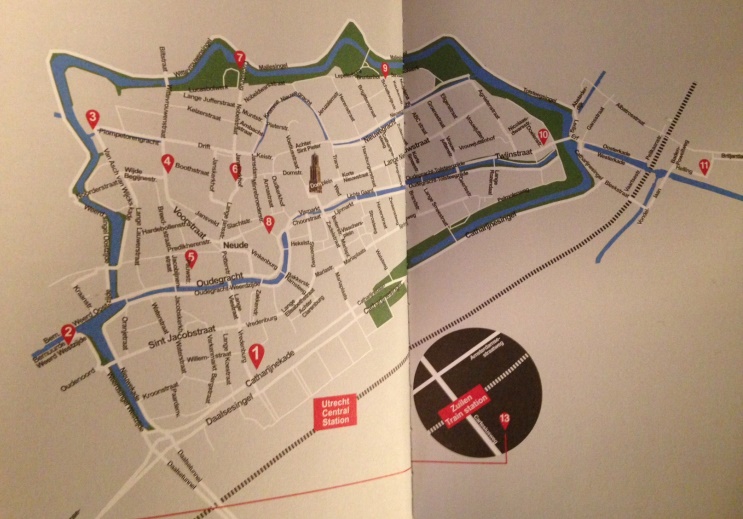 (2)    Side events such as exhibitions of photography (of Savages), the largest vinyl market in the world (truly humongous!), projection of movies chosen by the 4 curators of part of the lineup (Wilco, Savages, Suuns, Julia Holter) and many others.

(3)    LeMiniWho, during which some 70 additional artists were playing in another more than 30 places in the city! From record stores to alternative clothing stores, cafe/bars, even in houses, the owners of which opened up to welcome a band and a small number of visitors, with the respective party time afterwards. LeMiniWho was in full swing on Saturday and the feeling of walking at the central road of Utrecht in the afternoon, in a city filled of music wherever you look at, was truly one of a kind. We were thinking that we would not want to be anywhere else in the world at this moment! 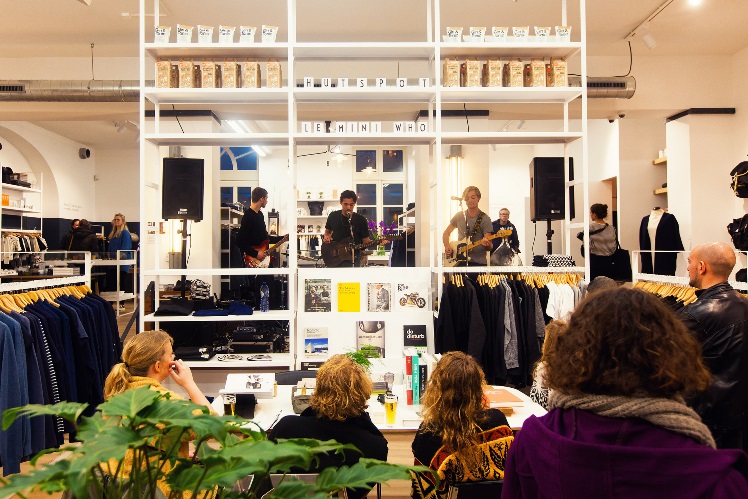 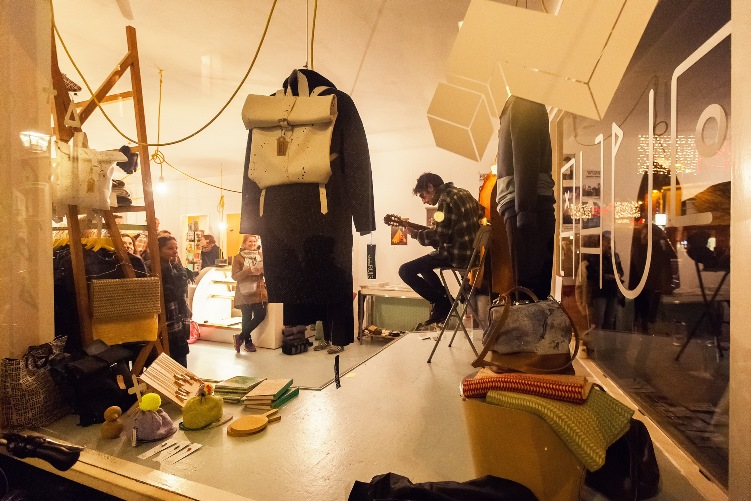 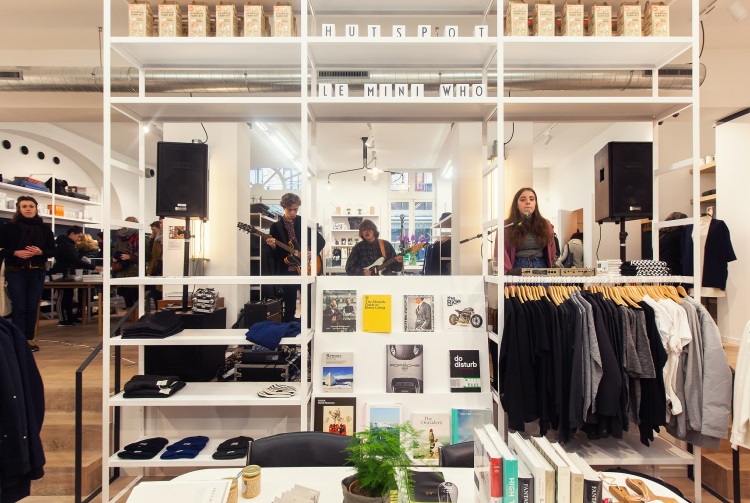 After visiting many festivals and gigs in the Netherlands in the past, it is probably needless to discuss the quality and the flow of the event. But, on the other hand, sometimes this is not self-explanatory. So, the entrance to the festival and all venues was relaxed and trouble-free. The lines almost non existent. With the majority of the people being in Tivoli, where the most popular bands were playing, the plethora of the bars and toilets everywhere made the experience even more enjoyable, eliminating any potential worry, leaving us to fully enjoy the reason of our visit. The music itself!

Truly, many congratulations to the LGW team. We were having a discussion with friends the last day over how much of a complicated venture is LeGuessWho and how impressive is the fact that everything flowed perfectly (at least to our's and the visitors' eyes). 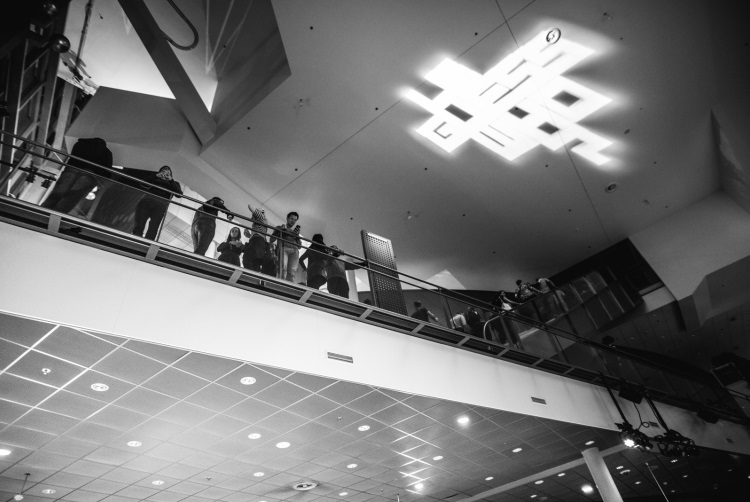 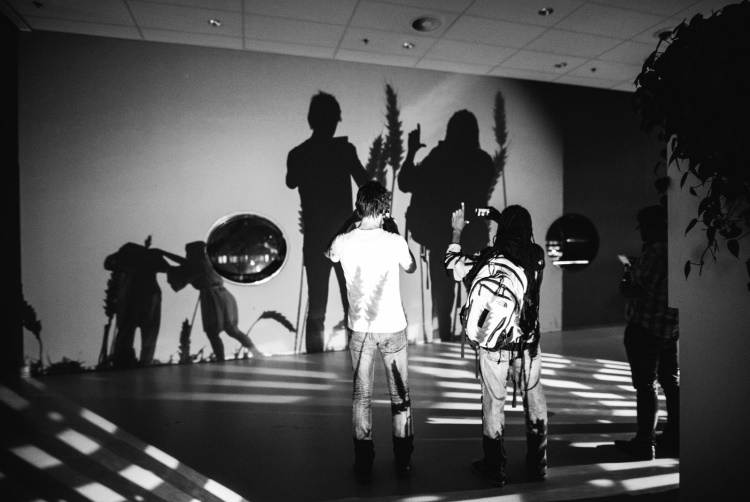 To close this chapter, we have to also mention the culture and mentality of the State, which tangibly supports such events with names from the psychedelic, punk, afro, jazz etc. space, which unfortunately in other countries such people would claim that this is barely music anyhow. Instead, the mare of Utrecht himself wrote an intro at the booklet-guide of LeGuessWho. The biggest name of the festival this year was arguably Wilco, in terms of popularity, which from what we heard attracted the most visitors as well. They played at the main venue of Tivoli, a space constructed more for classical or jazz music with multiple levels. Which means perfect sound! 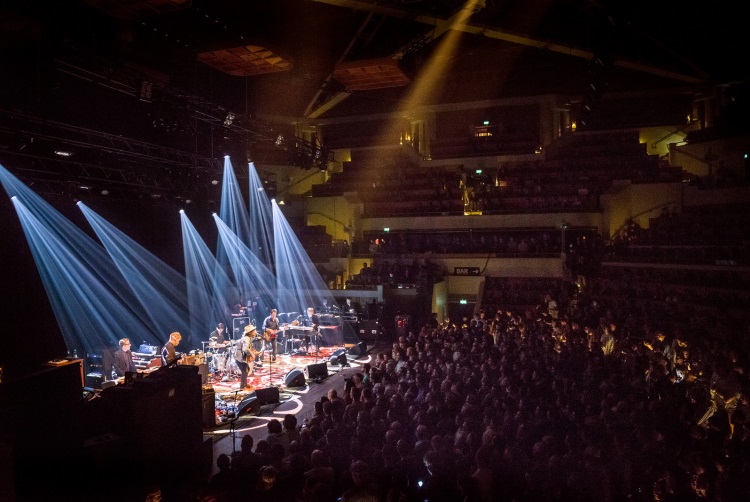 I consider many albums of Wilco as masterpieces of this sound. However, going to the concert I was thinking that they will be indolent to sleeping levels. And I could not have been more wrong! The dynamic of this band on stage is huge. Authentic Americana soiled with many additional (comparing to the albums) sudden disharmonic or noise elements. Even when we would not expect. In instances of absolute lo-fi atmosphere, when Jeff Tweedy was travelling us with his guitar and voice. 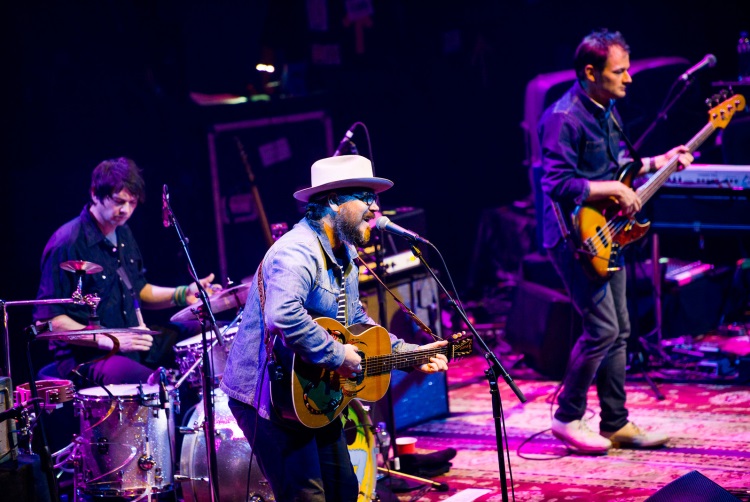 The crowd seemed initially kind confused with what is this that it was listening to, but afterwards it surrrendered to the high levels of musicianship of this band. We must lay a special mention to the unbelievable drummer, with his jazz  style and the weird beats, he was clearly the backbone of the band, under the supervision and guidance of the "conductor" Jeff. They played almost 2.5 hours, which was the longest concert of the festival. Their set was diverse, divided between their full discography, with a positive surprise being the choice to deliver 5 songs from Being There of 1996.

The last time we saw Wand live was in mid-2015, as part of the One Night In Pandora event, at the same venue. Having this experience in mind, we had prepared ourselves for a concert of raw aggressive straight garage. Another surprise was waiting though. Wand can be awarded the prize of the band that changed so much and so quickly! They played way more technical, with ongoing rhythm changes, pauses for imaginative solos, keyboards, slow psychedelic moments and significantly improved vocals. Virtues that we did not even imagine that they had! The straight garage came eventually closer to the end, but until then, Wand had made us forget it and we received it with less enthusiasm. Because what they played previously was so good! Unfortunately, the one hour that they had at their disposal was too little. Until next time... 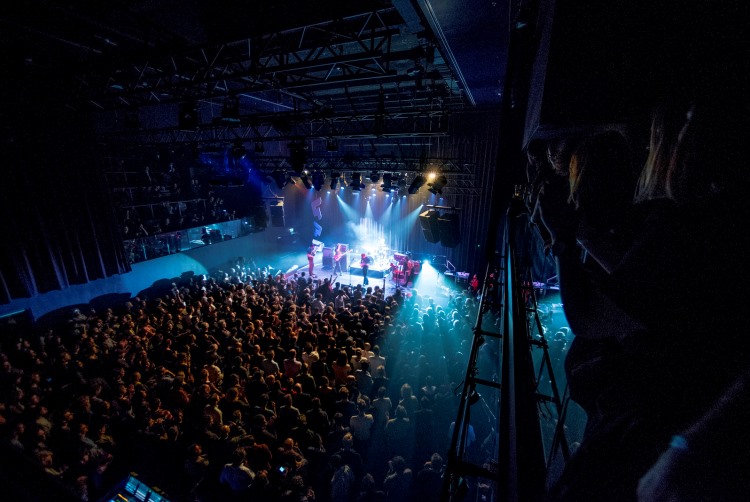 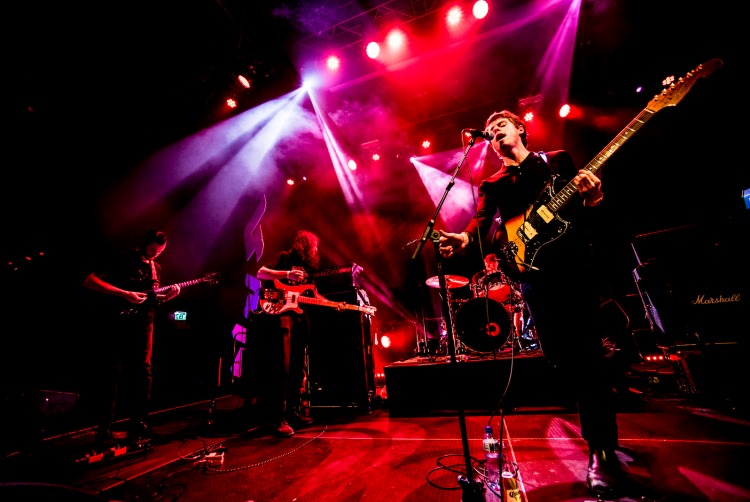 Beak> is the band of Geoff Barrow, drummer, keyboardist, producer, dj and arranger of Portishead. They are three people overall, with Barrow himself in the role of drummer and singer, Billy Fuller, bassist of Robert Plan, and Will Young at the keyboards and, occasionally, in guitar.

Fact: Beak> have based their sound by some 80% in the music of Can and Neu. They do not try to hide this, but rather the opposite. And rightfully, since we are talking about bands that have influenced so much the overall path of music, with artists-students of them like Joy Division, LCD Soundsystem, Radiohead, Fall, Sonic Youth etc. etc.

Fact 2: Beak> are a sum of amazing musicians, with Barrow in the role of a conductor, directing with his eyes, his beats and some words hidden in the rhythm the trip to psychedelic mystic alleys. Raw loud drum beats, bass riffs that never left our minds (even now), fierce and dirty keys and a voice from the underground. 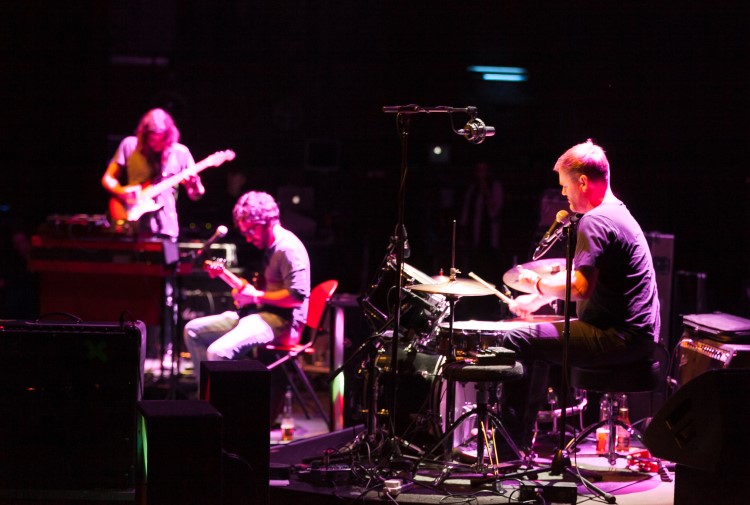 The band was on stage for about an hour. It was an hour of ecstasy that transported us equally to Germany in the early 70s and to Manchester at the end of the same decade. The comment I heard afterwards “ah, it wasn't as good as Can” was totally misplaced, because they certainly aren't. But it is possibly the only band at this point that can, to some degree, give us this feeling!

For Savages, we have written again some times in the past, such as for their gigs in Primavera and in Plissken Festival, about their impressive dynamics on stage. Jehnny Beth is potentially the closest we have on the female Iggy of our times, having a dominant presence no matter the venue, big or small. 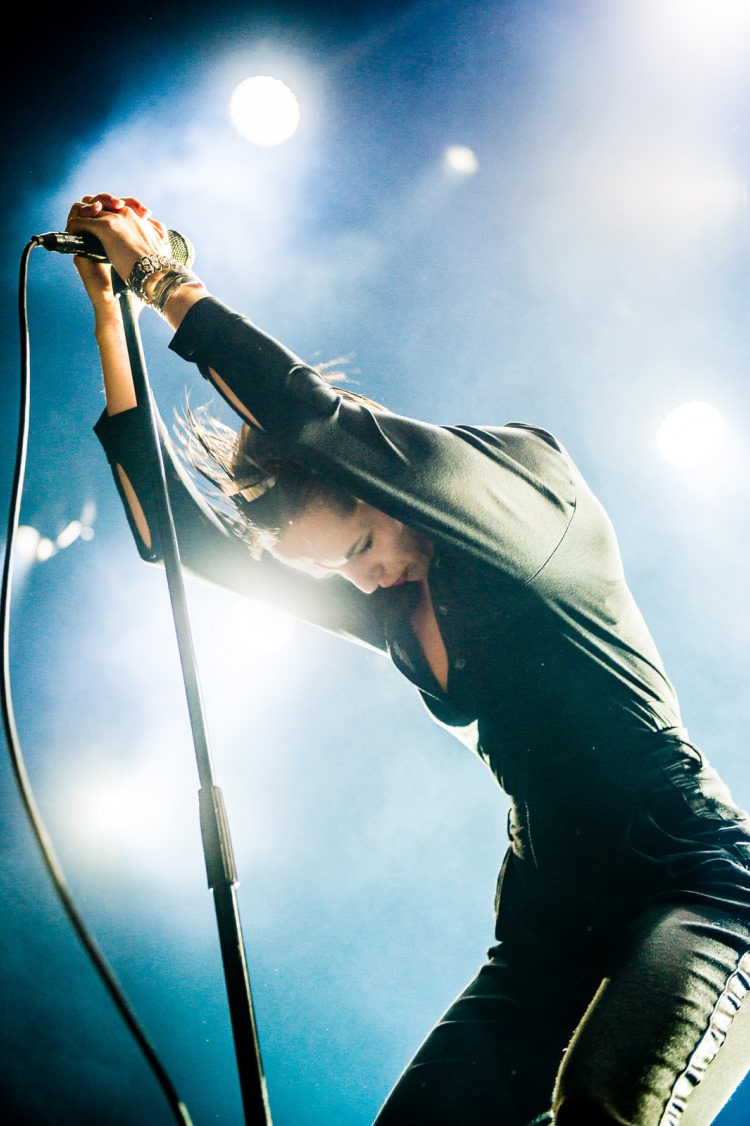 The concert in LeGuessWho was even more special for them, since they had chosen a good part of this day's lineup, as curators. But eventually, during their performance, we felt that something was missing. The band was solid and aggressive, as always, but the reaction of the crowd was extremely sluggish. This was felt by the band as well, I believe and potentially affected them. Beth of course could not accept such a thing. With her shouts and the, classic by now, stage diving she managed to change the atmosphere from the middle of the gig onwards, until the end with Fuckers. I would say that Adore was the best moment of the concert, with a very intense performance. Overall, we witnessed a very good live. However, knowing the capabilities of Savages, and having seen what they can do on stage, it was maybe slightly weaker than what we would expect. 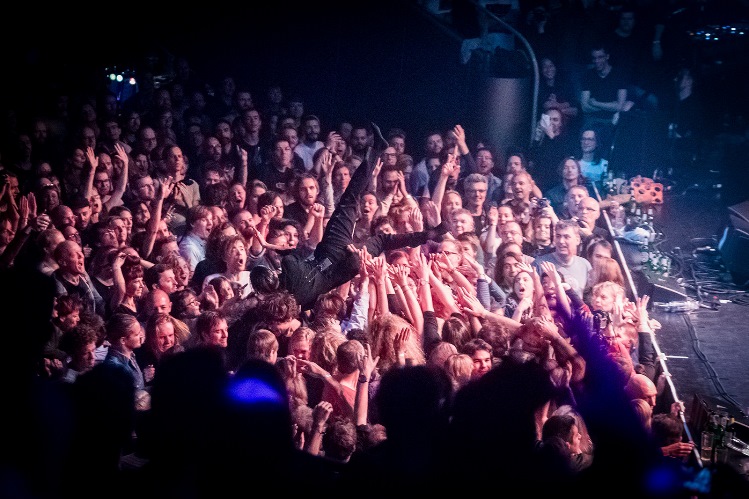 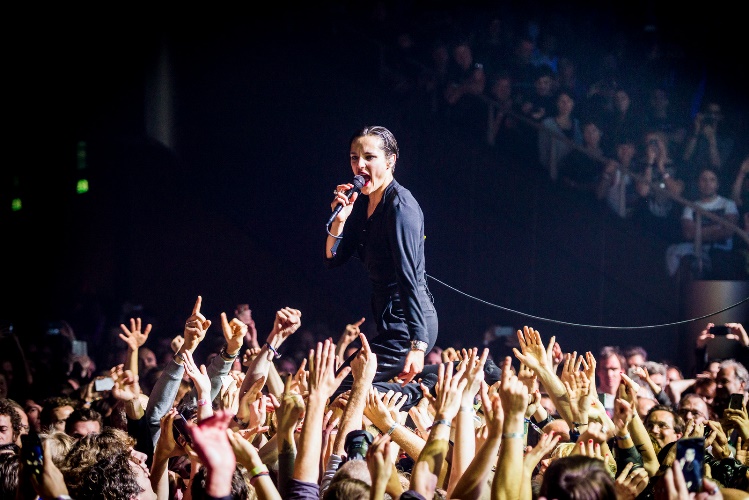 At this point, we will wrap up the first part of our review. The next days we will publish the second and last part, with our impressions from the concerts of Dinosaur Jr., The Ex, Black Mountain, Wooden Shijps, Lee Ranaldo, Swans κ.α. 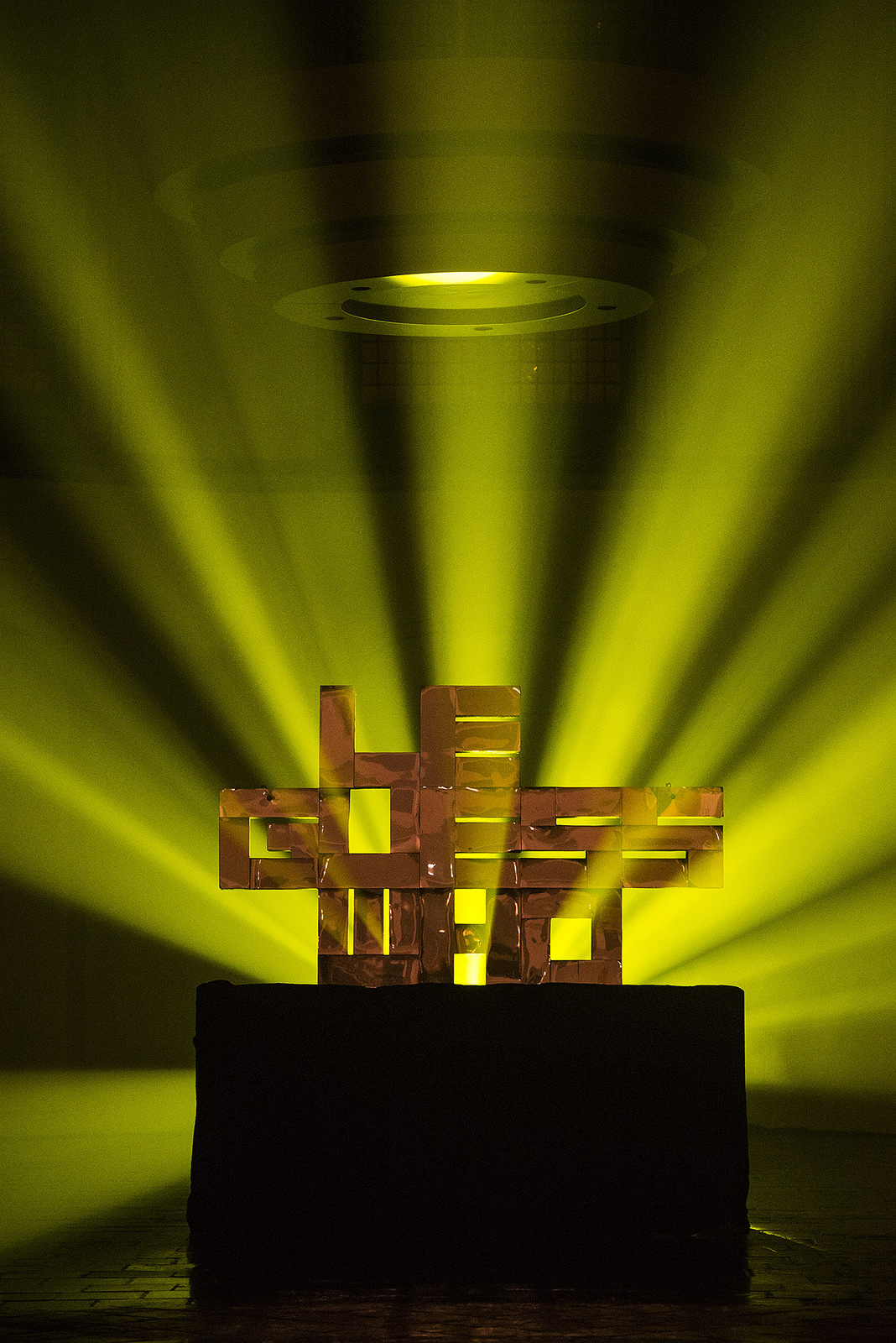 *We would like to thank the organizers, and especially Barry Spooren and Jessica Clark, for their invitation to cover once again Le Guess Who? Festival, as well as for the perfect festival experience that they managed to offer to us and the rest of the visitors.

*We thank also all the photographers that contributed their material and the magnificent work they did. For more photographs from the festival, please press here.