Every November, Utrecht is graced by the presence of a true underground titan in the European festival industry; Le Guess Who. This barrage of alternative world music reminds us each and every year that there is so much lesser known talent in an industry predominantly filled with thought out, perfect pop stars. Le Guess Who gives these artists a time to shine with a richly filled, well curated program comprised of over 140 (!) artists in 16 venues

Jerusalem in My Heart 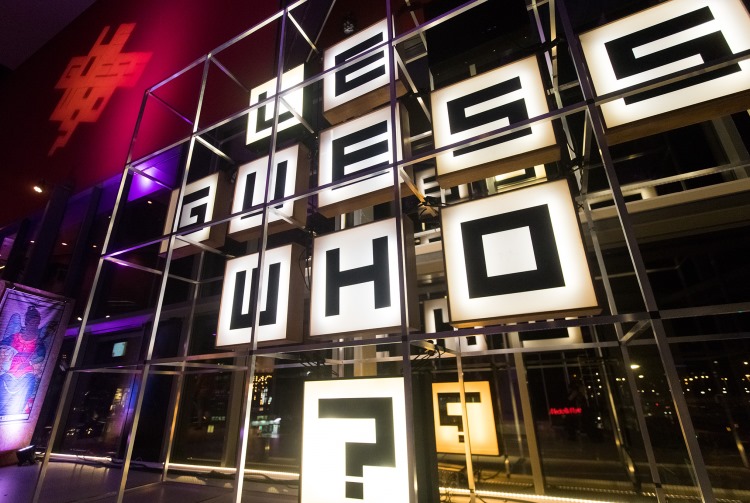 Utrecht lends itself to the festival which sees most of its acts performing in the massive Tivoli Vredenburg. However there are multiple additional venues across the town that accommodate the massive selection of performers; from the beautiful Domkerk and the cozy Ekko, to the far away De Helling and the foody paradise of LE:EN.

This year I also noticed how well organized the whole festival is with a massive amount of volunteers. Tivoli Vredenburg is littered with Art expositions, swag booths, food stands and the occasional smoking room. Every different stage in the Vredenburg has its own staff and bar to cater to the huge amounts of attendees looking for an alcoholic libation or a refreshing drink. 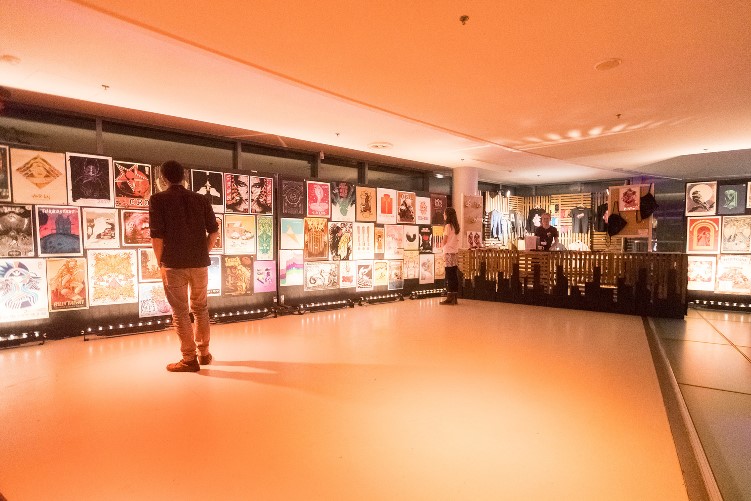 Side events include, but are not limited to:

1. The largest vinyl market in the world; which takes place in the Jaarbeurs indoor exposition space. The perfect place for any vinyl lover to spend massive amounts of money.

2. Le Mini Who, a free showcase festival with over 50 acts performing in over 20 venue’s comprised mostly of up and coming Dutch bands.

3. A selection of curated movies, shown in the city’s Arthouse theatres.

I truly have to congratulate the organization of the festival for the exceptional handling of a massive undertaking. Every small detail is thought of and all basic necessities are taken care of with well-cleaned toilets and smoking rooms. There was no pile-up in receiving armbands and the information booth was always very helpful in answering my questions. 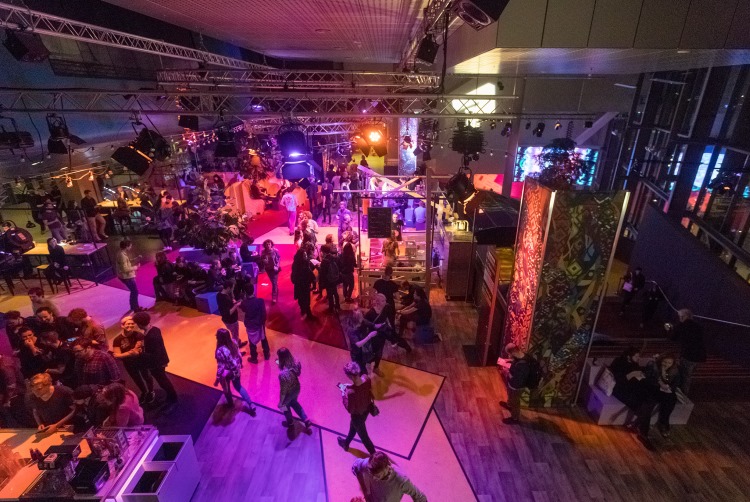 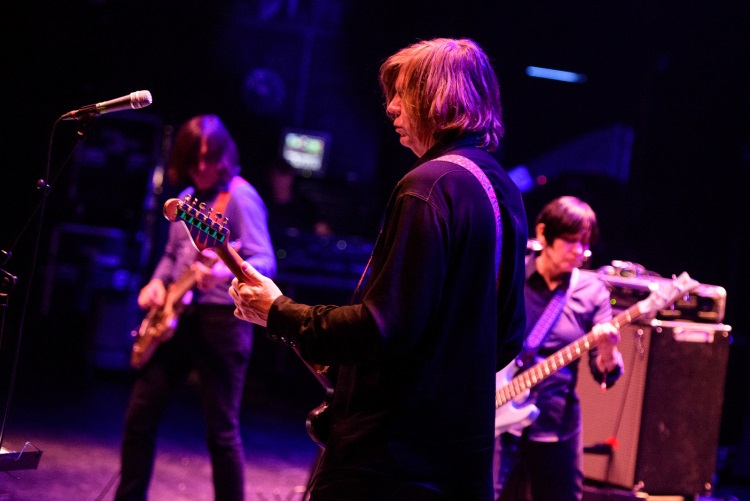 The first drop-tuned notes of Thurston Moore echoed through the Ronda stage to the exciting applause of an audience ready to fester on the explosive wild songs of a true alternative rock pioneer. The Thurston Moore Group, comprised of members of My Bloody Valentine, Sonic Youth and Nought, truly delivered one of the most sonically appetizing shows of the festival. Noise explosions were set off by complex clean guitar harmonies. I feel like the hour that Thurston Moore Group played was just enough. Even through some guitar difficulties, the crowd was never bored, listening with utmost interest, responding to the distorted calls of experimentation by one of rocks truest never-stopping inventors. 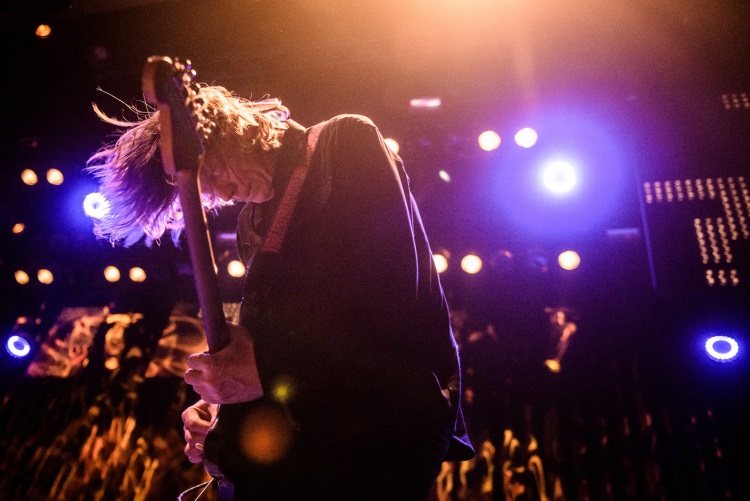 As Protomartyr was halfway through their set, something dawned on me: as an avid fan of the post-punk genre I don’t know if I could get through an entire album of them. I enjoyed the onstage antics of Joe Casey to a minimal effect. For a lyricist that has so much to say in his songs it seems that he has so little to show for.

The band though is goddamn tight, with a drummer that expertly emulates a complexly programmed drum machine that his nonchalant stage presence detracts from the overall intensity of the show. I admit I was more focused on the very tightly knit rhythm section and the melodically stuttering guitar than I was on the true meaning of the songs themselves. I believe that this show could have been so much more if it wasn’t for the (missing) on stage persona of Joe Casey. 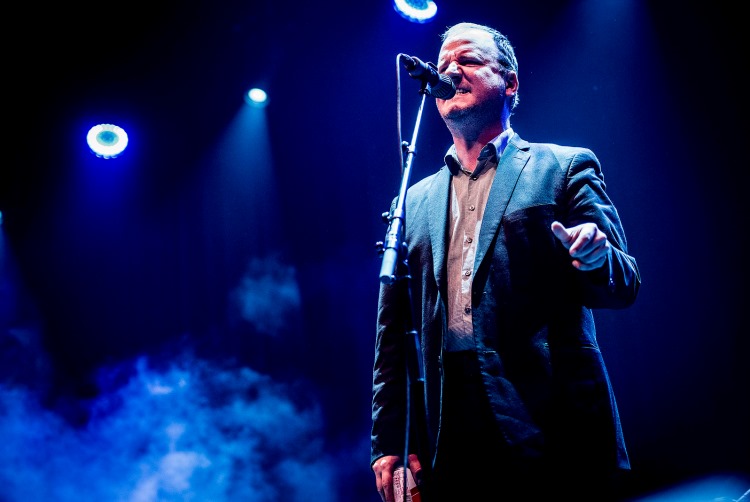 Jerusalem in my heart is the closest thing you will get to a human’s soul through the performance itself. An audiovisual treat of 16mm film projections carefully displayed in tandem with the electronic noise that reverberates through everyone’s heart. I never thought that music could make me homesick for a place I’d never been, however Jerusalem in my heart, with its haunting Arabic vocal melodies and thrusting bass made me yearn for a country I’ve never visited before in my life. 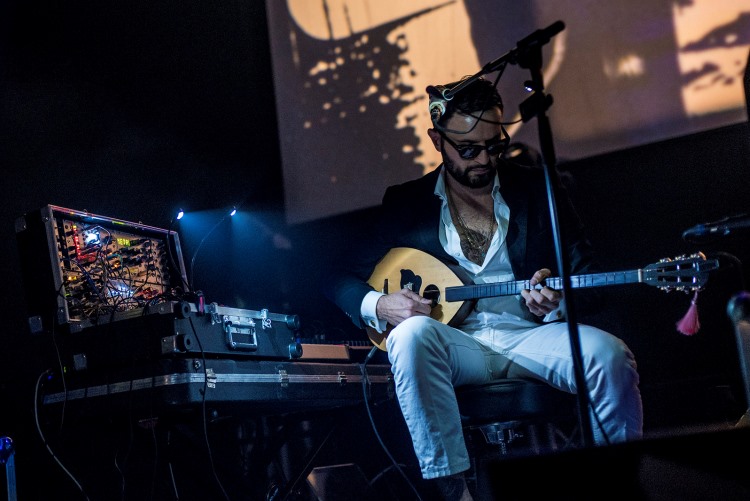 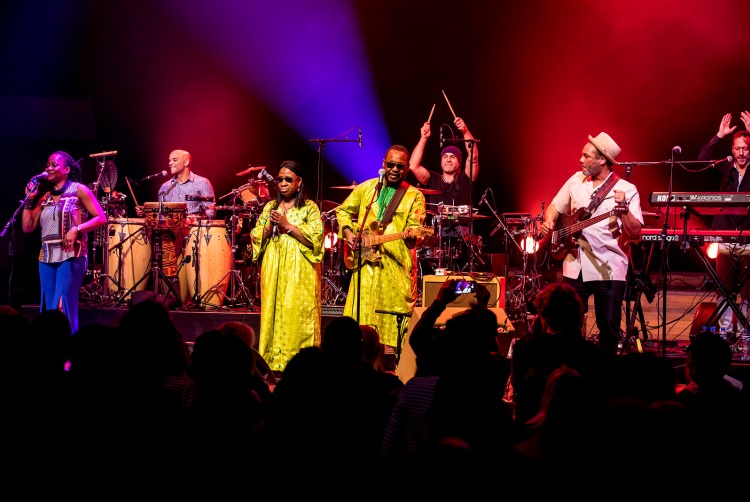 The crowd exploded as one by one the backing band of Amadou & Mariam took the stage, laying down an African Groove for the two blind namesake members to shuffle on stage to. One thing I noticed about this show is that everyone had a smile. Every single African rhythm was made even more energetic by the never-ending smiles of the entire band, obviously enjoying every single moment of the show. Amadou, a virtuosic guitar player, had plenty of opportunities to showcase his incredible guitar skills, to great response by the mesmerized audience.  There was a lot of interaction with the ‘late’ spectators, bright sing along harmonies cascading the bright rhythm section, all proving that, even though Mariam and Amadou have been around for a long time, they still have everything to give. Especially to an audience that is ready to dance and forget about the troubles in the world. 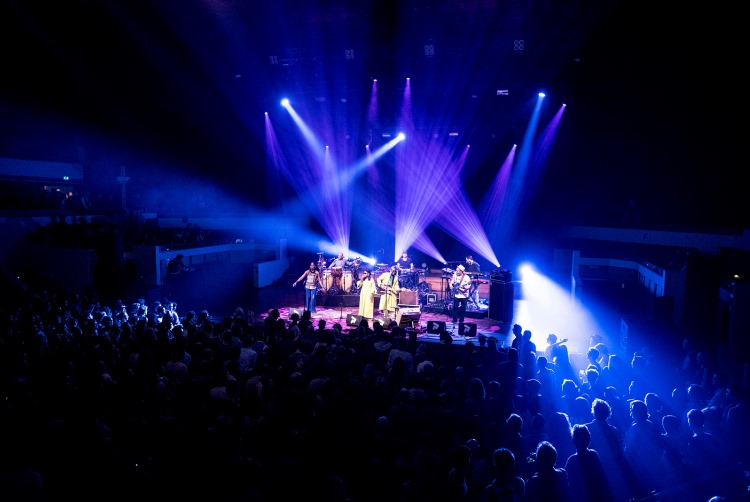 In the weeks leading up to LGW, GAS was heralded as a must-see by various publications. Described as a mix between Ambient and Techno with its own visuals, I was very interested to say the least.

As I managed to shuffle my way into a full ‘De Helling’ I was greeted by the opening notes of a seesaw synthesizer accompanied by projected visuals of a dense forest. After 10 minutes of pure ambient improvisation and visuals of forests I was not yet impressed. 15 minutes in, I started to lose my patience. GAS had not yet addressed his audience and was hidden to the side of the stage, behind his laptop and keyboard setup. A 4-to-the-floor electronic beat slowly panned through the mix, devoid of any bass or treble and any emotion. I told myself I would give it another 5 minutes. After 5 minutes the beat had faded and we were back to what seemed to be ambient improvisation. I was let down, disappointed by an act that was supposed to be exciting, that was supposed to make me feel something. Instead it made me leave the show after 25 minutes of nothing. 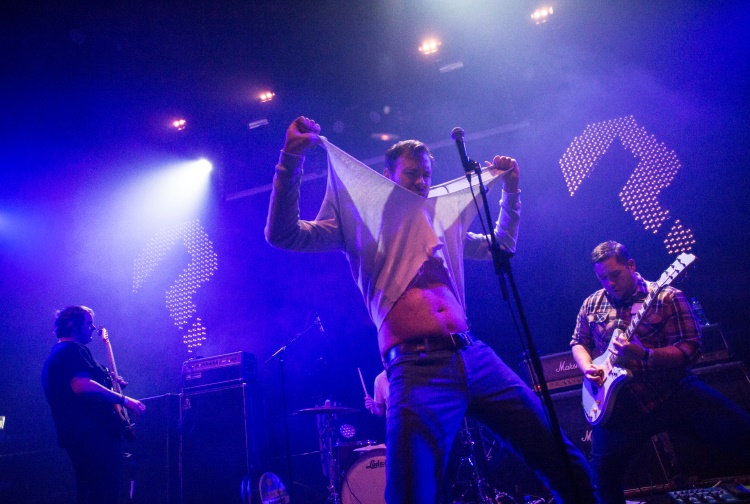 As the noise-punk band took the stage in the very early hours of the morning the audience was ready for a nightcap in the form of moshing and feedback guitars, and boy did they get it. “We were told by LGW we could play whenever we want, so we’re going to play on a Friday night, at 2:30 in the morning!”

The crowd went wild as front man Matt Korvette decried his bands manifesto: “Playing Punk music on a Sunday is for pussies, so lets get fucked.” Feedback rains terror on the wild-going crowd as the band plows through its set with the fury of an advancing army.  Multiple concertgoers stage dive into the abyss of sweating, fucked up masses as they consume the raw, punk of Le Guess Who’s most menacing band. 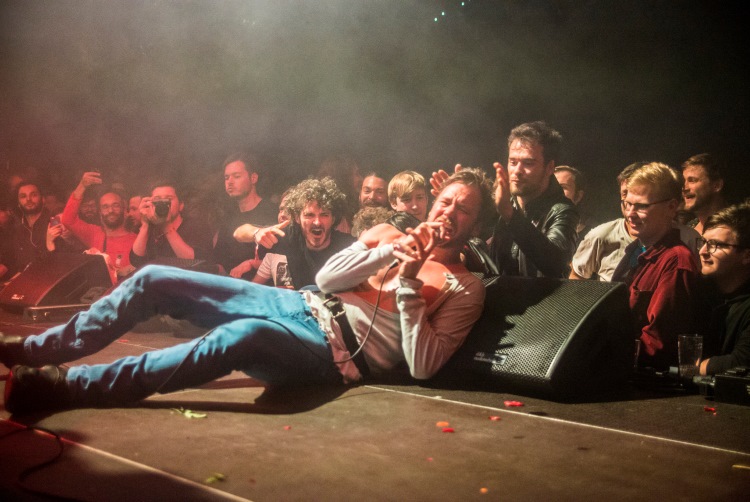 Next days, we will publish our second, and last, part of our review for this year’s Le Guess Who Festival, with our impressions from Metz, Altin Gun, ICP Orchestra, Shabaka And The Ancestors, Zeal & Ardor and many more. Stay tuned... 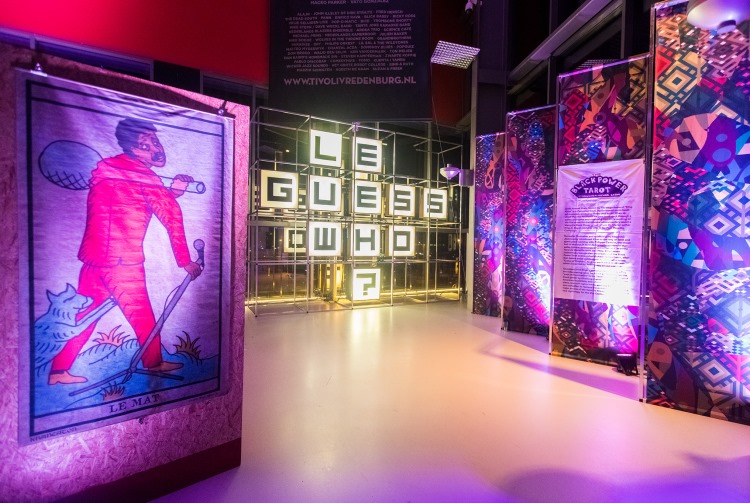 *We would like to thank the organizers, and especially Barry Spooren, for their invitation to cover once again Le Guess Who? Festival, as well as for the perfect festival experience that they offered to us and the rest of the visitors.