When The National head to the Mango stage on the 2nd night of Primavera Festival, rumors about an unexpected set, similar to Arcade Fire’s 2017 memorable one, have been floating around, substantiated by the presence of their crew in Barcelona for a few days before the show. But at this point even die-hard fans must acknowledge that this is not going to happen, Gabi Ruiz has done a lot of magic this year, but not this particular one.

How could I know that? I am of these fans. I’d rabidly searched online for hints on their potential secret set and now, while the first notes of Nobody Else Will Be There opened the show, I am in the very paradoxical position of facing a light disappointment. I was expecting them to play for more than the scheduled one hour and 15 minutes set. They’ve always said they loved Primavera.

This night is their first European date since the night in Brussels when they played “Boxer” in its entirety to celebrate the 10th anniversary. I didn’t check their recent festival setlists, not to completely ruin the show. Autumn 2017 shows were all about their latest release, "Sleep Well Beast" (2017) often intertwined with some deep cuts (Karen, Gospel, Brainy), for the joy of the aforementioned die-hard fans, and unexpected covers (The National covering The Queen? It happened) so expectations are fully justified.

Or better, my expectations were justified, while I don’t have any clue of how the crowd is feeling, most of them are behind me. I ended up doing one of the things I usually do make people fun of, aka navigating my position during The Breeders set, that deserved a more attentive listening (apologies), ending up in a decent position. 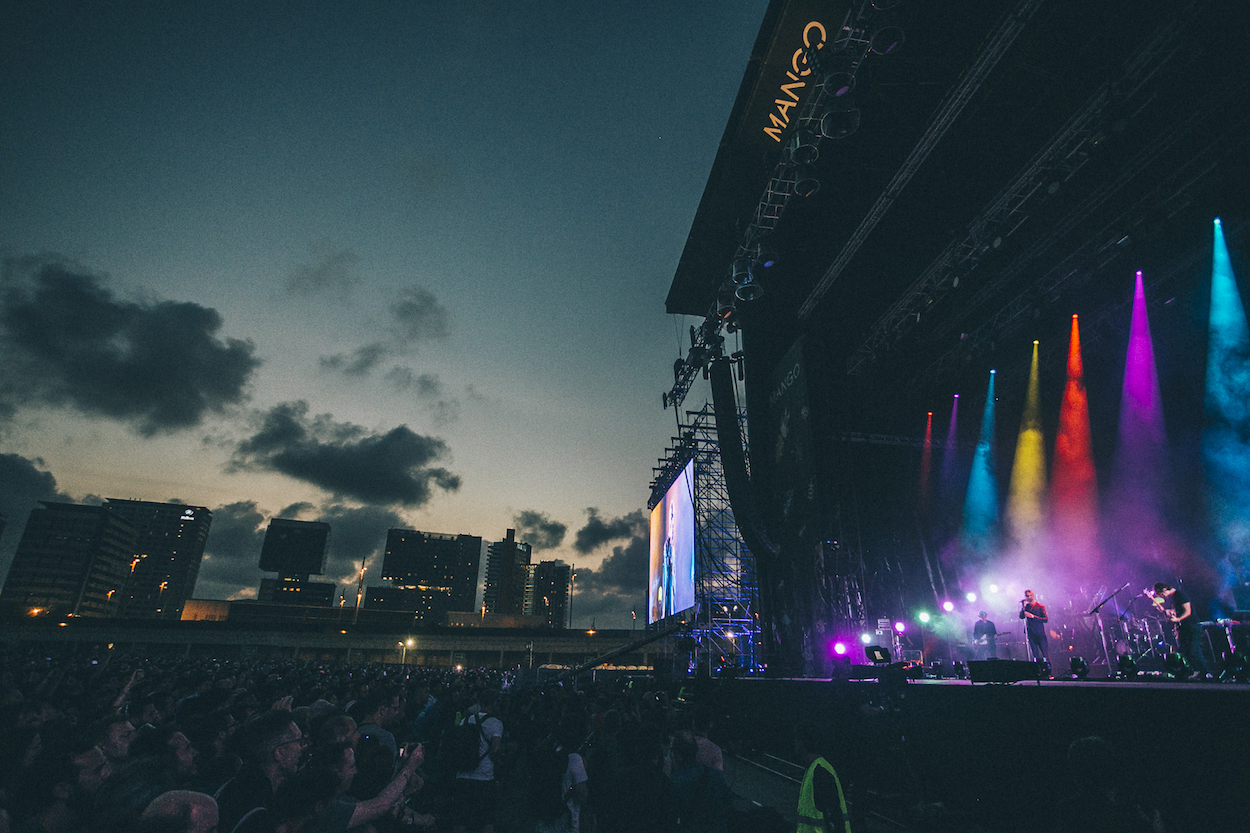 I’ve never been so close to one of the Primavera main stages. That was a necessary move, I keep telling myself during the following hour, while close up frames of Father John Misty playing on the opposite stage appeared on the screen, making myself questioning my choice. From what I can see from my twisted sitting perspective FJM is glowing and my legs are hurting from the weird position I am sitting.

I love Primavera as much as I hate the choice the program forces you to do (Do you love more Mum or Dad, kiddo?) and its two main stages. I mean they are bearable for artists you like but you don’t feel the need to be closer to. Or for artists that are capable of filling enormous spaces as Nick Cave did last night, or decide to bring on stage a techno-naturalistic Bjork's utopia, but if an artist or a band you have a deep emotional connection with is in Mango or Seat stages it is just negative. These stages are so incredibly distant from the front of the barriers. Security reasons, I get it. 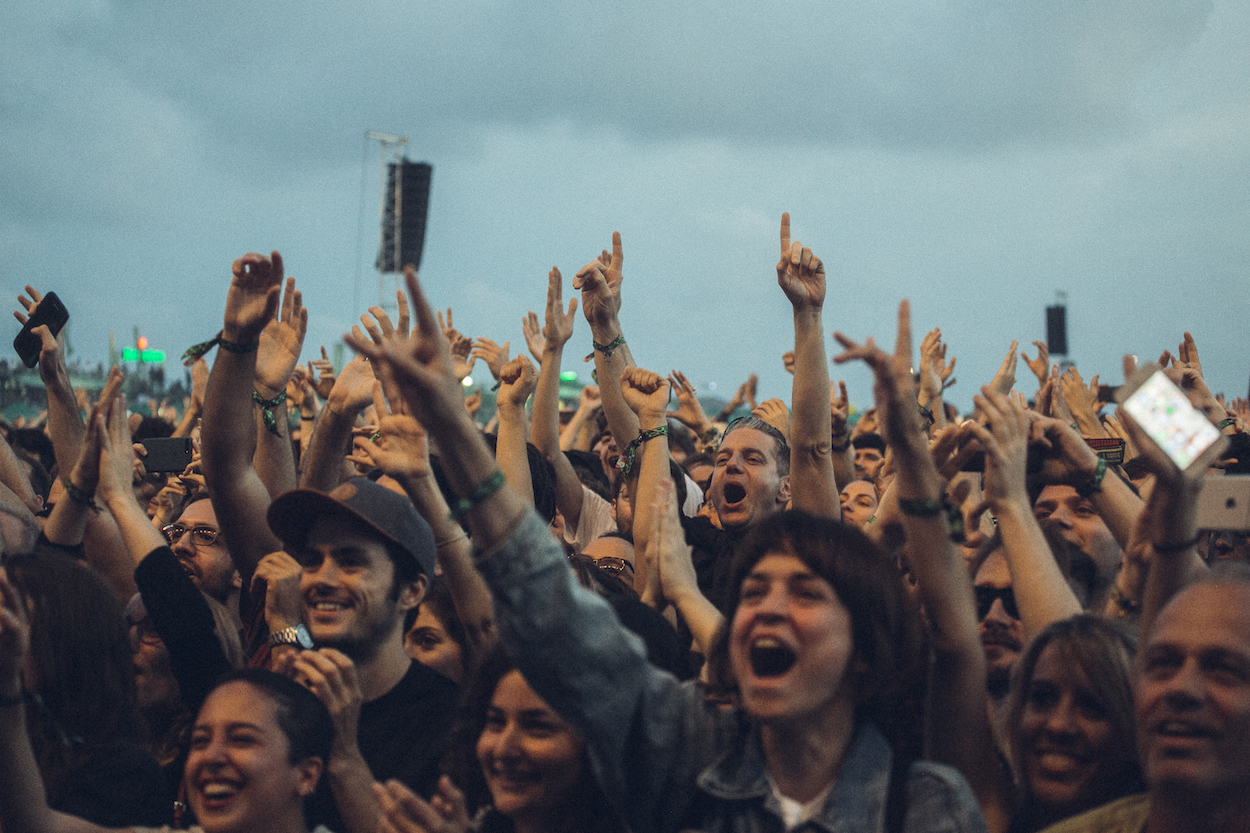 Tonight, the staging of The National is ever further back, at least a couple of metres away even from the stage’s edge. So, watch me while I try to establish some sort of connection with this show while I am inspecting the head of the person before me (short one thanks god), trying not to obstruct the view of two blonde teenagers that aren’t speaking any English or that is what they wanted that the weird lady alone in the second row to believe, photographers do they job in the pit, and Berninger and Co do theirs, progressing smoothly to The System Only Dreams in Total Darkness, first single of Sleep Well Beast. I never made my mind around the actual meaning of the lyric, I mean they said it has a political take but if you look closely at the lyrics is not clear what they are about. As it often happens with Berninger’s evocative and multilayered lyrics. What I know for sure is that it has a powerful chorus.

I’ve seen Berninger singing The System a bunch of times now. I’ve seen him jumping on the barriers just to dance the ‘I can’t explain any other, any other way’ verse with audience members. I’ve seen him singing this verse as his entire life and ours would depend on this, and we would gladly scream back at him, with the same intensity (but thankfully with less amplification). Not tonight.

Tonight, Matt is glued to the stage. I mean he is wandering around a little, he made a joke about almost falling off from the stage, but he is definitely not pushing it. Maybe he is tired. Jet lagged? The rest of the band, the Dessners at the guitars, the Devendorfs, Kyle Resnick and Ben Lanz at the horns section, are doing their best in building up a precise and solid performance. But I cannot help to notice that there is something missing. 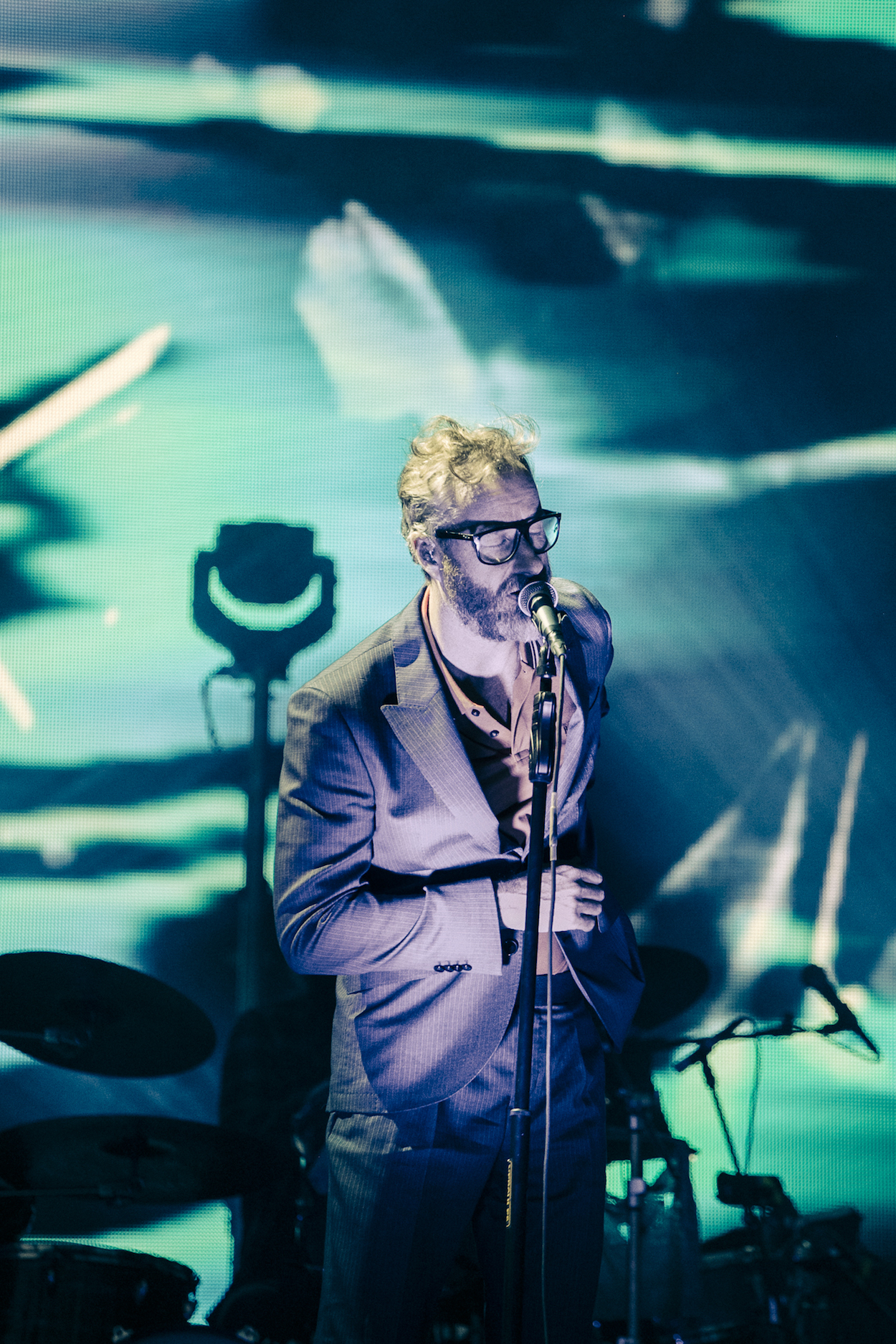 Maybe we are the ones still "jet lagged" from the enormous Nick Cave performance whose emotional catharsis saturated the entirety of Mordor and we are now set on an unreal and stellar standard? I don’t know, but I am struggling to find the right mindset to appreciate this live. And I feel bad for this. They are my favourite bands and even though I know that my love for band is a cycle and maybe won’t last forever, I am not ready to let them go. Not yet.

For quite a long time now The National have been a constant presence in my life, a magic spell that when evoked, especially in the form of a live show, had the power of making me remember how I felt when I was happy and five years old and they gave me back a tiny bit of that feeling. The intensity and the purity of that joy. But tonight is clearly not happening, despite all the conditions are here. It is a warm summer night in Barcelona, warm breeze from the sea, I had a panic attack last night ending up in the most caring A&E ward ever and I survived, I have the privilege of being there, how I dare not to feel good?

Matt singing on stage about another year ‘getting away’ is not helping it.
I wonder if they are enjoying this. If they ever get bored of their own voice, stage presence and everything. I bet that has already happened like millions of times. There is an old documentary by Vincent Moon about the band when at some point Matt runs away from the stage leaving the rest of the band improvising for minutes before realizing that he is not coming back and they have to stop playing eventually. This doesn’t happen anymore but maybe I’d almost prefer it. 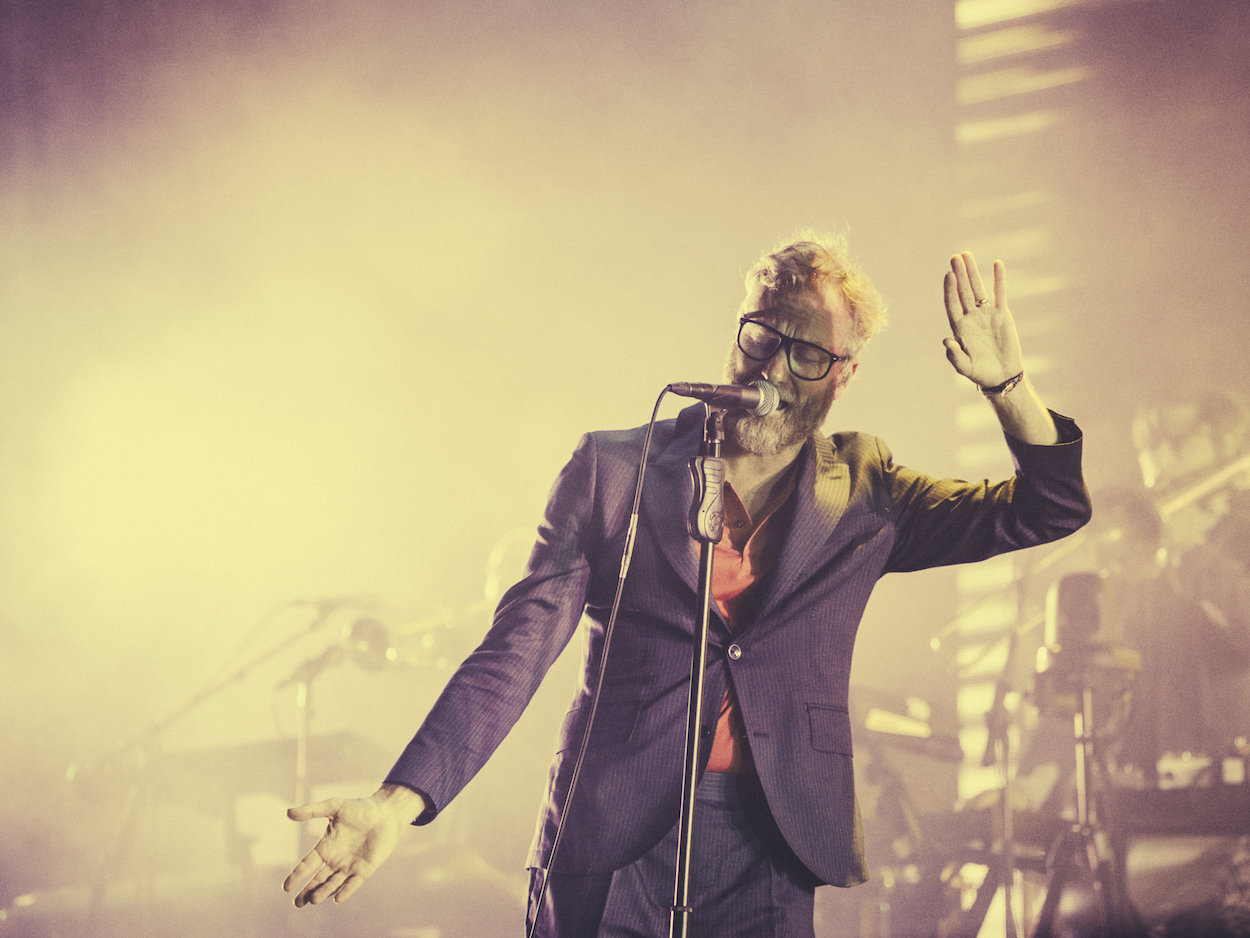 Maybe they’re pissed out for something or they are saving energies for the huge headlining tomorrow night in London at the All Points East Festival? But they love being here, at least this is what Aaron is saying. He is grateful to having shared the bill with so many incredible artists, especially The Breeders, he says, they are from Ohio like them and so tonight Bloodbuzz Ohio is dedicated to them. And Matt echoes him.
After Bloodbuzz they move to I Need My Girl confirming that set list is equally divided between Sleep Well Beast and hit singles (assuming The National have something that could be defined hit singles, maybe the category of songs known by most of the audience’ would explain it better).

They cannot even be accused of playing it safe, they are delivering a steady and good performance, Matt remembers most of the songs. Are they becoming too good? Do I miss the imperfections, the mistakes, the fragilities and the fun that usually burst from their live performances and somehow mirror the content of the lyrics? Am I so tied up to the idea of the performer pretending to be an emotional wreck on stage?

Thankfully there is a limit on how much I can overthink during a live show and I reached that point during course of the first six songs. Afterwards I just set in for the performance. There are more songs from Sleep Well Beast: Day I Die followed by Karin at The Liquor Store, renamed ... Karin at the Duty Free because of the stop that Matt was forced to after the airline lost his luggage; Fake Empire and, almost at the end, it comes Rylan. Rylan is one of their deep cuts, a song they played for the first time since 2011, but never recorded and they recently started playing it again live. It is a nice gift to finally have a chance to see it live.

Mr. November eventually convinces Matt to use that nice stairwell in front of the stage and he goes on in doing his usual climb on the barriers. Then Terrible Love signals that we are almost at the end. After Terrible Love, there are two possibilities. They would either play their a cappella traditional closure, Vanderlyle Crybaby Geeks or would shift to About Today, from their 2004 EP "Cherry Tree". Tonight is not a Vanderlyle night.

While playing the first notes of About Today, Aaron murmurs that ‘this song is for Scott’. Then he firmly adds ‘Not Devendorf’ to avoid any misunderstanding. He is referring to Scott Hutchison, the leader of the Scottish band Frightened Rabbit whose recent death clearly affected both fans and fellow musicians. This is the second time that his name is mentioned during the festival. The other night the Twilight Sad ended their set with an incredibly emotional rendition of Frightened Rabbit’s Keep Yourself Warm.

About Today is a song built around a dialogue between two people. ‘Can I ask you about today’, one keeps asking the other in the desperate tentative to protect the space of caring and tenderness that they once inhabited. I always thought that it was about two people in a relationship that has started to fall apart, but now I realize that it is bigger. It is not only about the end of a relationship, it is now about not taking for granted people that surround us, it is about someone taking their life, it is about who we’ve lost.

Towards the end of the song, Matt whispers for the last time ‘Can I ask you’. The echo of the verse just stays in the air and that is when the audience starts clapping rhythmically, possibly to feel a little less alone. Then the tension melts into the glorious outro, band members leave the stage one at the time, and only Bryan is left on the drums. Eventually he stops his drumming too. Lights signals that the show is over, crew starts packing, we head to the next show, maybe a little bit slower than other times.

Watch their entire show at Primavera '18 below:

Audio/Video: The National - The System Only Dreams In Total Darkness

Audio/Video: Algiers - The Underside Of Power