The ornately adorned and gilded Orpheum Theatre in Los Angeles is one of the oldest venues in the city. Built in 1926, The Orpheum stage has hosted historic performances from Judy Garland, Ella Fitzgerald, Duke Ellington, Aretha Franklin and a young man named Stevie Wonder. 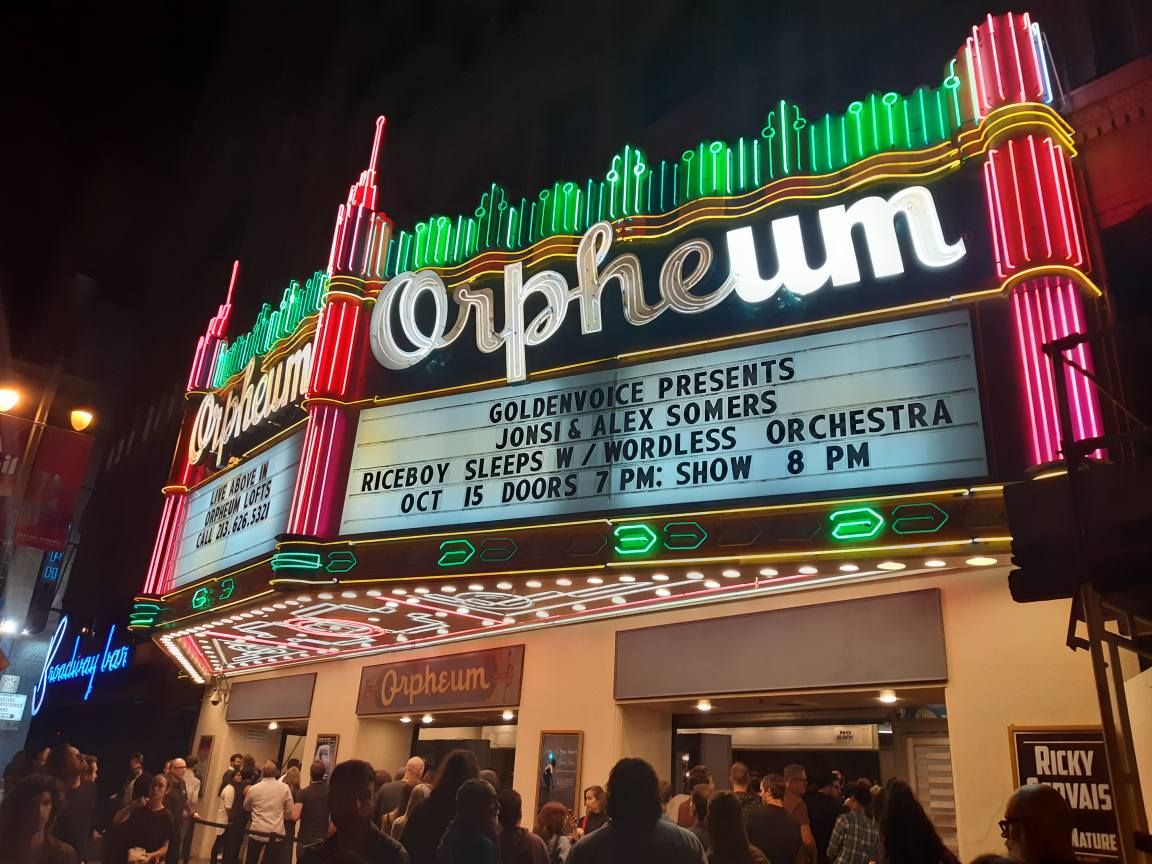 Upon entering the theatre, it was immediately apparent that this rare performance was prepared to be a very different experience. Veiled in a thin fog from smoke machines and dimly lit with a few low spotlights, the stage was set with a 12-member choir ensemble and 21-piece orchestra of stings, brass and percussion, including an elegant harp that towered above the others. All designed and coordinated with the Wordless Music Orchestra and Choir to bring “Riceboy Sleeps” to the live stage for the first time since the album’s release in 2009. Now, ten years later an experimental ambient album is transformed into a grand live experience that is, by definition, a truly modern classical performance.

“Riceboy Sleeps” (Parlophone Records) is the ambient creation of Sigur Rós frontman Jónsi Birgisson of Iceland and his longtime partner American artist, musician and producer Alex Somers. In the beginning the duo didn’t set out to make an “album” per se, rather a creative experiment of atmospheric sounds, ambient textures, tape loops, strings and occasional “wordless” vocals. The quieter musical roots of Sigur Rós are apparent within these compositions, but as a whole take on a less brash and more delicate sound with the influence of Alex’s song writing and mixing techniques.

Entering the stage with conductor Robert Ames, Jónsi and Alex introduce the show as a sort of personal “homecoming” on this 10-year anniversary tour. They have recently relocated from Reykjavik to Los Angeles and now call this city their creative home base. Alex described that the performance will be split into two sets. The first set consists of three movements from their 2009 album “All Animals” and following a brief intermission they will perform “Riceboy Sleeps” in its entirety. He then asked the audience to participate in a live sound experiment and to look around their seats for packets of Pop Rocks candy. He explained that during the third movement of “All Animals” conductor Robert Ames would queue the audience to eat their Pop Rocks and to share with neighboring seats since they did not have enough for all 2000 in attendance.

The performance began with the three movements of “All Animals” without support from Jónsi and Alex on stage. This quiet symphonic introduction served as the perfect warm up to “Riceboy Sleeps”. “Chapter Two” is completely devoid of any recognizable instrumentation and played from a series of tape loops as a short symphony of animal sounds cawing, chirping, moaning, hooting and cooing as if one were lost in a friendly forest in the dead of night. During the middle of “Chapter Three” conductor Robert Ames turned to face the audience and raised his hands to signal that is was Pop Rocks time. 2000 mouths open with crackling Pop Rocks made it literally sound as if it was raining inside the theater. From what first seemed like a quirky idea to get the audience involved, quickly turned into a spontaneous sound design effect and certainly a memorable moment for everyone in the seats. 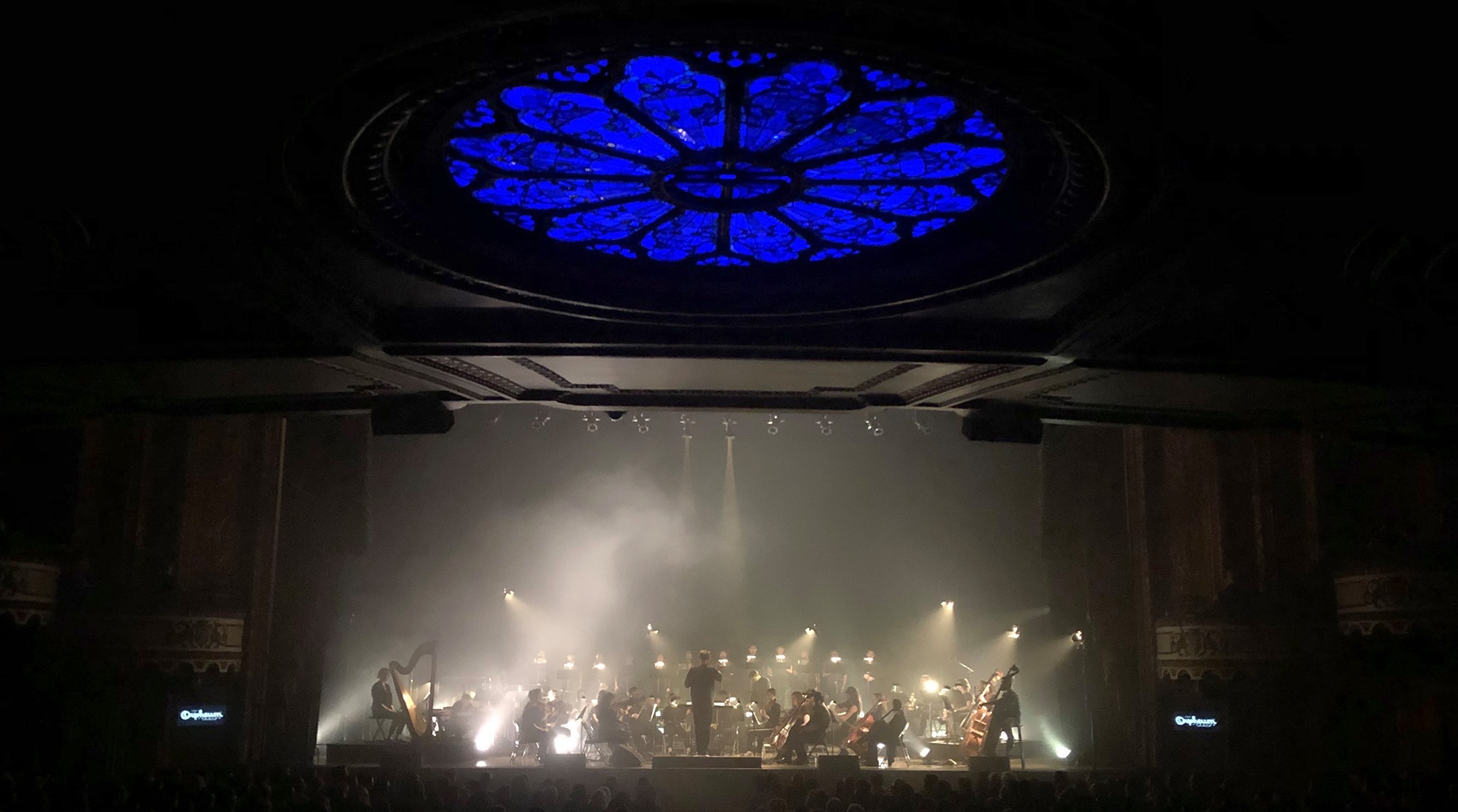 Joining the orchestra on stage, Jónsi and Alex strummed guitars for an added electric vibe among the orchestra - Jónsi with his signature bow on his electric guitar creating soaring and haunting chords. One of the highlights of the evening was “Indian Summer” which lulled the audience to into an almost meditative state of twinkling tape loops, piano, and long extended notes. As the final strings trail out, Jónsi’s solo vocal sustains a single pure note for over a solid thirty seconds and was met with an eruption of applause that lasted almost as long.

“Boy 1904” was the most angelic moment of the performance which was delivered entirely by the choral ensemble. The otherworldly effect of their voices transformed the theatre space from a historic jazz stage into a glowing gothic cathedral on the opposite side of the globe.

The buzzing atmospheres and the slow, ringing delivery of “Daníell in The Sea” and “Howl” made the air in the theatre feel as if it was magnetic. As the final composition “Sleeping Giant” closed the show, it was played with only a handful of long sustained notes over a bed of tape loops that conjured up the quiet rocking sounds inside the hull of a large wooden ship.

It was an eclectic and wide age range in attendance which proves this genre of experimental ambient and modern classical music has created a solid and loyal fan base and continues to produce timeless, progressive and truly beautiful music. 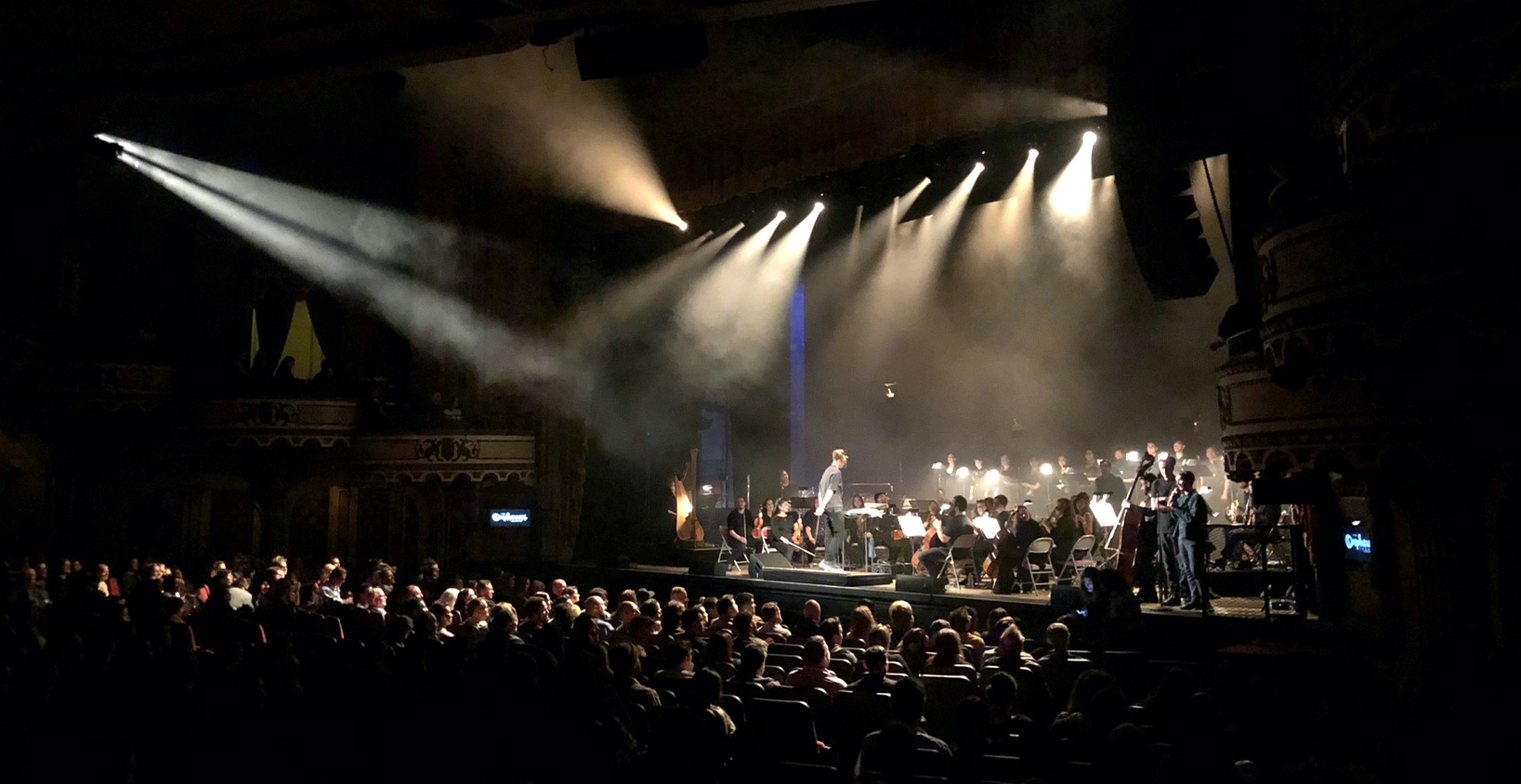 A very special thank you to Trevor and Humbert of BIZ 3 for granting ClockSound special access to review and photograph this performance. 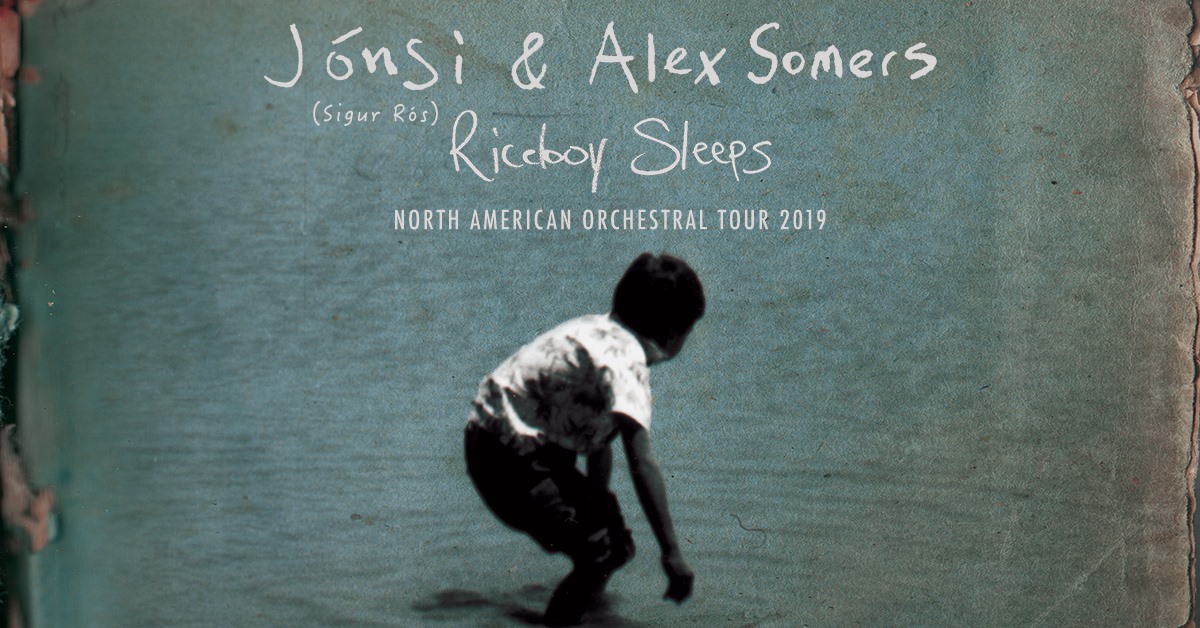 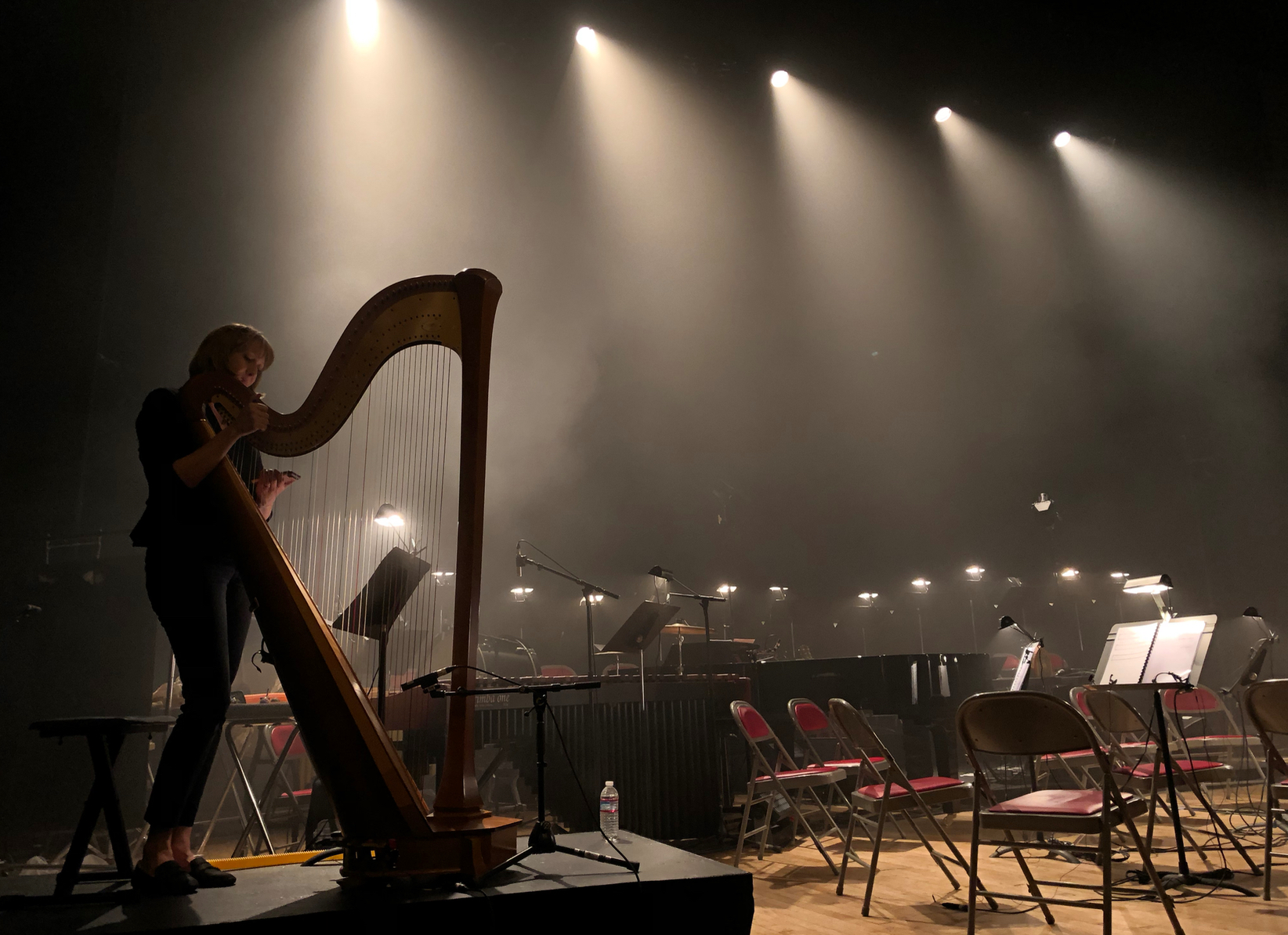